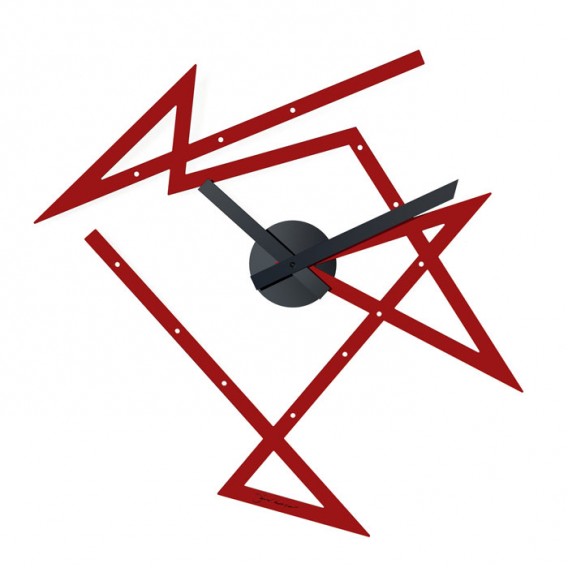 Designed by Daniel Libenskind, it is a wall clock whose body consists of a broken line.

The clock mechanism is placed in the center of the structure and works with an AA battery.

At his first collaboration with Alessi, Libenskind designs "Time Maze", a wall clock whose body consists of a broken red line.

The design of this object refers explicitly to the author's architectural language, characterized by discontinuous lines, broken surfaces, cuts and openings.

The mechanism of the Clock is placed in the center of the structure formed by the red line.

The hands, black, are positioned on a small metal circle of the same color, which hides the mechanism.

The hole that is used to hang the Clock on the wall is placed on the mechanism. In their movement the hands meet the red line, now intersecting, now overlapping with it.

A further formal detail emphasizes this game between the red line of the watch's body and the two small black parallelepipeds which make up the hands: the thickness of the three elements is the same, when one of the hands overlaps a portion of the red line, the it completely hides, creating further discontinuity in the structure of the Clock.

The hours are indicated through small holes distributed on the red line, in an ideal irregular circle that recovers the conventional composition of the clock face.

"Time Maze" is made of steel colored with red epoxy paint. The hands are instead in aluminum dyed with black epoxy paint.

Its mechanism works with an AA battery.

No customer reviews for the moment.

13 other products in the same category:

To be determined Shipping
€ 0,00 Total